What Are Cannabis Derived Terpenes?

Cannabis provides relief for so many through cannabis derived terpenes and cannabinoids present in cannabis. These are botanically terpenes as some are found in a number of other plants. Finding terpenes for sale is not uncommon as they are in a number of products.

Terpenes are compounds that occur in plants that impact the smell, taste, and sometimes the color of a plant. Nature is full of wonderful medications and marijuana/cannabis is one of the best. Below will cover terpenes commonly found in cannabis and what you need to know.

Do Terpenes Get You High?

Cannabis derived terpenes are not going to get you high but can induce relaxation or promote energy. The fact that they can also interact with the endocannabinoid system to reduce pain makes them quite versatile.

Plant terpenes occur in nature all of the time which is why some terpenes also are contained in some fruits and other plants. You can buy terpenes online in so many different products that you would be surprised. Terpenes are legal so do not worry about purchasing a cartridge to smoke of your favorite terp.

Cannabis derived terpenes can help individuals with everything from pain and insomnia, to things like calming upset stomachs. Terpene cartridges with THC or CBD are quite prevalent if you are looking for a way to feel a nice buzz and relief simultaneously. 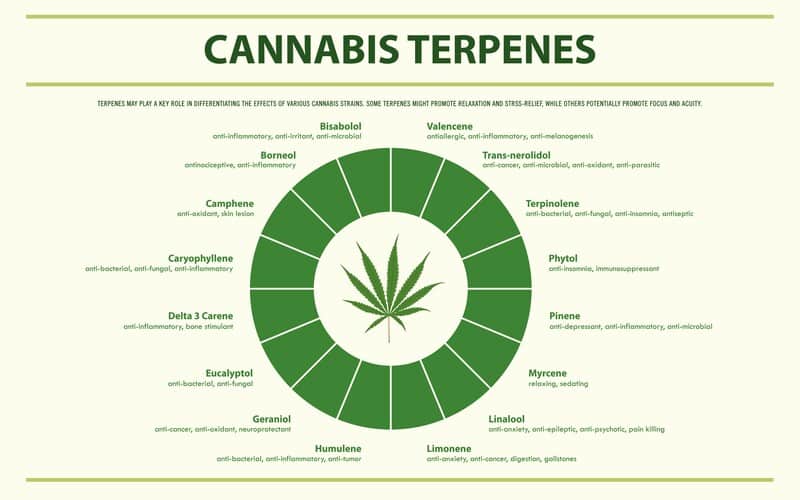 Myrcene has an earthy flavor and aroma. The beauty of this terpene is that it promotes calmness in the mind and body. The ability to reduce anxiety also allows this terpene to help people that suffer from insomnia to fall and stay asleep. Strains that contain this terpene at high levels include Strawberry OG and Member Fruit.

Linalool is used in a number of soaps due to its floral aroma. There is a spicy taste that comes along with this strain that will be familiar to marijuana enthusiasts. The terpene interacts with the endocannabinoid system to reduce pain which makes it popular among cannabis consumers. Strains that are high in this terpene include Zkittlez and Timewreck.

Carene can be found in a number of trees which can explain the flavor which is cedar-like. There have been studies done that actually help prove this terpene can help improve your memory. Strains that are high in this terpene include Strawberry Cough and White Cookies.

Caryophyllene has helped so many patients reduce pain and inflammation in their bodies. This terpene is responsible for the flavor of the cannabis being consumed. Strains that are high in this terpene include White Buffalo and Rocket Fuel.

Limonene is going to have a taste and aroma of lemons which is what it was named after. This terpene will give you a shot of euphoria and reduce your inflammation simultaneously. Strains that are high in this terpene include Grape Pie and Blueberry OG.

Valencene has a citrus taste and aroma which is why it is named after Valencia Oranges in Spain. Strains that are high in this terpene tend to have incredible anti-inflammatory properties. Jack Frost and Agent Orange are two strains that contain this terpene at high levels.

Pinene is going to have the flavor and aroma of pine. This may be the most popular of all cannabis derived terpenes because it is perfect for a patient suffering from pain, anxiety, and stress. There are those that love this terpene as it reminds them of the flavor of rosemary. Strains that are high in this terpene include Purple Urkle and Cherry Bomb.

Bisabolol is used widely in products for sensitive skin which highlights its healing properties. This terpene is usually found in cannabis at lower levels than dominant terpenes. The terpene promotes relaxation which is why it is so effective at treating stress, insomnia, and depression conditions.

Humulene is not an uncommon terpene as it occurs in a number of plants that are considered herbs. The terpene has a spicy flavor and earthy aroma which cannabis consumers really enjoy. This terpene is said to turn your mood around and give you a sense of euphoria. Strains that are high are Shark Shock and Triangle Kush which originated in Florida and also thrives in humid weather.

Growing Your Own Medical Marijuana

Growing your own marijuana can turn your garden into a terpene factory. Finding relief through cannabis has been a surprise to a number of patients that were previously suffering.

The most important aspect of growing your own medical marijuana is the legality of cultivating marijuana. You do not want to risk your freedom if you have to get your marijuana from a dispensary in your state even if you are a medical patient.

Growing marijuana will take experience and knowledge as some strains are far more sensitive than others. It could take you years to hone your growing skills if you do not have some professional help. You can learn years of lessons in a single growing season by finding a commercial grower that is willing to help you.

Check out our products here.

Here is the link to the full article

My Animal Got Me Into the CBD World