If you want to learn more about how cannabidiol (CBD) works inside the body, our human CBD receptor chart breaks down the endocannabinoid system and its cannabinoid receptors. Here are three things to look for that will simplify the science of cannabis.

CBD and other cannabis compounds, known as phytocannabinoids, work by interacting with the body’s endocannabinoid system (ECS), a complex network of cannabinoid receptors that regulate homeostasis, a state in which physiological processes in the body are stable.

Throughout our body, we have a system of cannabinoid receptors that affect a wide range of biological processes including, but not limited to:

If the body cannot achieve homeostasis, it becomes vulnerable to disease. This is where cannabis and, particularly, CBD step in. Cannabinoids, the main active ingredients in cannabis, function similarly to endocannabinoids (anandamide, 2-arachidonoylglycerol), which are naturally produced in the human body.

When endocannabinoids are not enough, plant-derived cannabinoids can help the body achieve homeostasis. Cannabinoids have been used to help treat a variety of symptoms and conditions including:

Cannabinoid receptors can react differently depending on the cannabinoid that interacts with them.

CB1 receptors are mainly found in the brain and central nervous system. They are also found in lower concentrations in other tissues including:

Activating CB1 receptors in the brain is what causes users to feel the plant’s intoxicating effects. In the brain, CB1 receptors are located in the hippocampus, cerebellum, cerebral cortex, amygdaloid nucleus, and basal ganglia.

These regions of the brain are responsible for regulating short-term memory, mood, motor control, pain modulation, and more. CB1 receptors are not usually found in areas that control the heart and lungs, which makes cannabis a relatively safe medicine without the risk of overdose.

CBD, in particular, does not directly bind to CB1 receptors. Instead, it has indirect effects by influencing the binding capacity of the cannabinoids to receptors.

CB2 receptors are mainly found in the immune cells such as the tonsils and spleen, and also the skin. CB2 has the highest density in the liver. Activating these receptors affects the release of cytokines responsible for immune and inflammatory responses.

CBD does not directly bind with CB2 receptors. It indirectly affects them by blocking the cannabinoid receptors to inhibit activation.

How CBD Works In The Body 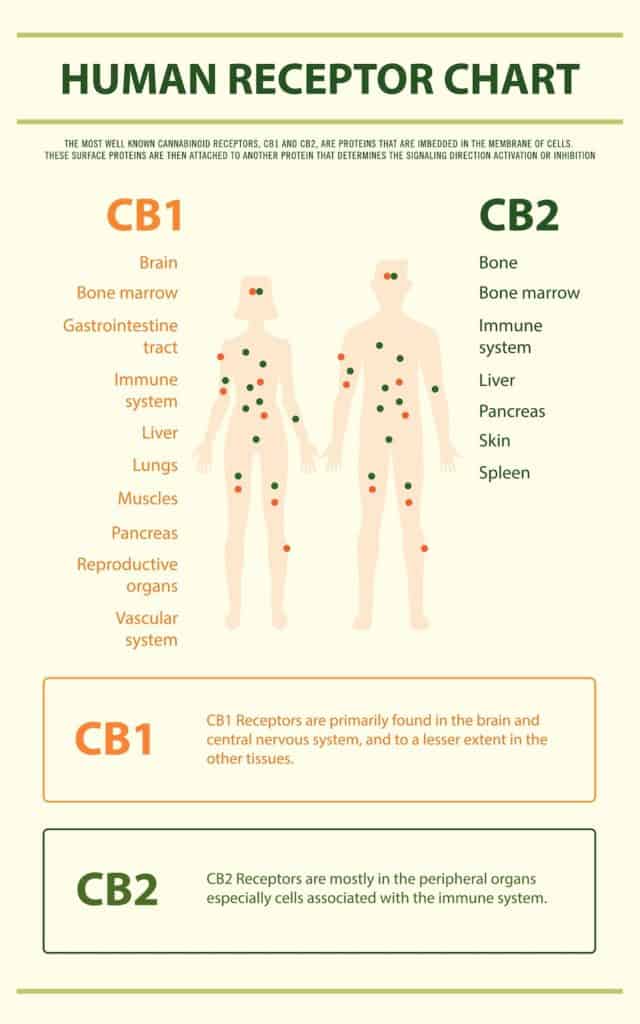 CBD is a non-intoxicating compound that has enormous medical potential. It does not have a good binding affinity for CB1 or CB2 receptors. Instead, the compound works as a receptor agonist by blocking receptors so that other cannabinoids cannot bind with them.

When paired with THC, CBD can help reduce THC’s negative side effects including anxiety, intoxication, and increased heart rate. For this reason, CBD is a popular and non-intoxicating alternative to THC-based medicine.

In the body, CBD does the following:

CBD and its acidic precursor, cannabidiolic acid (CBDA), can help with a variety of conditions including epilepsy, rheumatoid arthritis, diabetes, weight loss, and anxiety. Best of all, they do not get you high or cause the negative side effects of THC.

Check out the full article here.

Here is our full line of products.

My Animal Got Me Into the CBD World

There Are No Coincidences